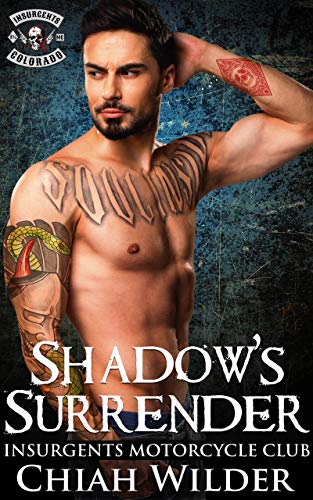 The Crossroads of Destiny and Desire.

He’s a hardcore biker who likes his women easy, his whiskey neat, and his Harley fast. Nothing complicated … until a pampered beauty collides into his world.

Shadow is an Insurgent, one of the largest outlaw MCs in Colorado. Riding his Harley, hanging out with his fellow Insurgents, and enjoying the ladies, are his idea of the perfect life.

He likes things simple and free from drama, and that includes his women. Privileged princesses? Definitely not.
Then at his friend’s engagement party, he sees her. Sexy, curves in all the right places, and a dangerous look in her dark green eyes. Oh yeah … his libido is starting to smoke.

All he wants is one long taste.

Scarlett Mansfield comes from one of the richest families in the county. Her life is perfect and well-orchestrated until she sets her eyes on the chiseled biker across the room. The intensity of his gaze makes her blush … almost.

She knows in her world the rugged stranger is taboo, but she is drawn to him.

Scarlett has complication stamped all over her, but an undeniable desire sizzles between them, and Shadow can’t stay away.
When they come together, sparks combust setting off a series of events that will forever change their destiny.

The Insurgents MC series are standalone romance novels. This is Shadow’s story. This book contains violence, abuse, strong language, and steamy/graphic sexual scenes. It describes the life and actions of an outlaw motorcycle club. HEA. No cliffhangers.

Shadow’s Surrender by Chiah Wilder is the first book on my October TBR list, and it was a great start to the month…let me tell you. This book was just an amazing read.  After my surprise finding out that Chiah had a new Insurgents MC book released and finding out there is another coming, I was on cloud 9.  I always look forward to reading her books–literally stop my life to read her books, especially the Insurgents MC Series.  I am so glad it’s not over yet and showing no signs of ending–so many other brothers to read about in this series.  I started and finished Shadow’s Surrender on the first day, this was a real page turner and I just couldn’t put the book down–not for a second.

The Shadow meets the pampered princess

This is Shadow and Scarlet’s story.  Shadow a member of The Insurgents MC went to his best friend’s engagement party where he meets Scarlet.  When he saw her from across the room, he was immediately attracted to her and she him.  Anyway, they hooked up at the party, although Scarlet was seeing someone else at the time (who she was not interested in anyway).

Shadow agreed to help one of the brothers finish a construction job…which just so happens to be at Scarlet’s house. Scarlet is a pampered princess, who lives at home with her parents, but she is sassy and a strong female character. I like how her character developed from the pampered princess to a strong independent female.  The two hooked up again a few times, but Shadow was fighting the attracting and only wanted to keep the relationship purely sexual.

Shadow is fighting his own demons–his beloved mother was murdered when he was a teenager and he has vowed to find her killer.  Scarlet’s parents are trying to force her hand to marry a family friend (who happens to be a jerk) to merge the two families together, while she is trying to branch out on her own to start living her life on her own terms.  Her relationship with Shadow was only the beginning. When two people from two different worlds get together it’s never easy–especially with meddling parents and people trying to kill you.

Chiah Wilder delivers again with Shadow’s Surrender.  As I mentioned, I couldn’t put this book down until I was finished.  This book had it all mystery, action, hot sex, leather, Harleys, and hot alpha bikers.  It was good to see all the other couples although Hawk acted like an ass to Scarlet when they first met.  The book was at times hilarious with the banter between the brothers. We got to see some more of the kids, which is great and got me wondering if there will be a second-generation series coming soon…because that would be awesome!

What I love about Chiah’s stories besides the alpha males and sassy strong female characters…is her plot.  Every book that I have read from this series is exciting and always keep me on my toes. I can never see it coming…gets me every time and Shadow’s Surrender was no different.  I thought I had it all figured out and then BAM!! a plot twist.  I did not see that one coming.

This is a great series and an intriguing book, and I can’t wait to see more of the brothers get their HEA.  I highly recommend the series and this book.