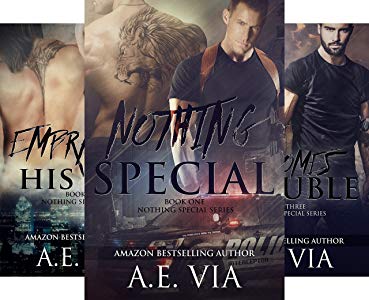 Free is new to the department, where he is an IT expert (well, he is a lot more than that).  He replaced his best friend Tech, who is now a field detective.  Free met Hart, the SWAT Captain, who protected Free from a police officer that wanted Free and won’t take no for an answer.

Hart is a divorcee and has some self-confidence issues from the abuse he sustained from his now ex-wife.  Hart knows that he prefers men but has not done anything about it–until he met Free. Free also has issues and suffers from anxiety attacks when confronted by aggressive people.  Pretty soon, the two develop a relationship, and things get heated real soon.

I have to say that this is my second favorite in the Nothing Special Series.  This one pulled at my heartstrings because both men have emotional issues that they had to deal with.  Luckily, they were able to help each other to get past them.  Hart’s ex-wife did a number on his self-esteem–no woman should be that cruel to her husband.  My heart broke for him just imaging living his life with that woman.  She was both mentally and physically abusive to him.  He is just a big teddy bear.  I wish all men could be like him.

This book was another slow burn for me, which I love because when the sex part came, it was explosive hot as hell.  They have been attracted to each other for so long that when they finally did something about it—the sex scenes were amazing!

You also get to see some of the guys in the story with their antics–gotta love them all.  God and Day had a lover spat, which Hart had to give some advice because God was in the dog house.  It all worked out in the end.

Before I sat down and started reading this series, I have never heard about his author before.  I was browsing looking for another M/M Romance novel to read and came across the series.

I really love her writing style, and the characters she creates are amazing.  Of course, I am about to start her other series, Bounty Hunters, in which we were introduced to one of the characters.

I highly recommend the Nothing Special Series.

Click here to read my review of The Secrets in My Scowl by A.E. VIA.

What do you think of my review?
Let us know your thoughts; please leave a comment below