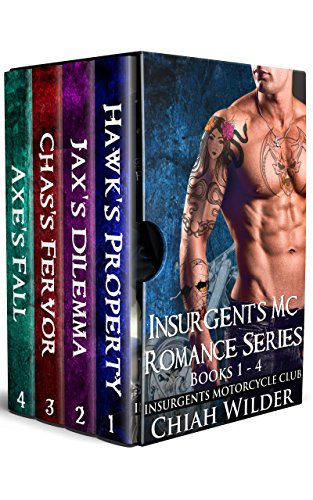 This series is one of the best Motorcycle Club Romance series that I have read.

These brothers live by their own code. They don’t care about the “citizens” or what anybody thinks about their lifestyles.  They are a family and look out for each other–at all times.

The women are beautiful, sexy, and sassy, in all different shapes and sizes, and different backgrounds.  They love as hard as their men.

The Insurgents Motorcycle club brothers fight hard, play hard and LOVE even harder.  This is what I love about this genre. The Insurgents MC doesn’t give a damn about the “citizens” or what anybody thinks about their lifestyle.

Let’s take a look at the books in the series and meet the brothers and their beautiful women. Each story has a Happily Ever After (HEA), no cliffhangers, and can be read as a standalone.  I would say to read in order, so you can get to know each brother.

This series is full of suspense…danger…action… Chiah Wilder did an awesome job of balancing the romance, the passion, the chemistry, the suspense, and the action.  You will not be able to put the books down, and you will not be disappointed.  All the characters, the couples, the stories will keep you devouring the books-one-by-one…page after page.

What I like most about this series is that each brother is different. What I find in some series is that the characters seem to be the same…just different stories. This was not the case.  Each character was very real and easy to love.  You will fall in love with them instantly.

The books contain violence, strong language, steamy/graphic sexual scenes, and some sexual assault (not too graphic).  If these things bother you, just skip over them.  Just keep reading!

The first book in the series is Hawk’s Property.  Hawk is the VP of the club, and when he met Cara (a lawyer), he wanted her immediately. Cara gave him the wrong phone number, but faith intervene, and they met again-when Hawk’s case was assigned to Cara.  This is my favorite couple and therefore, my favorite book/story in the series. This plot was one of the best in the series…but I am bias, this is my favorite–after all.

Jax’s, Sergeant-At-Arms fell in love with Cherrie, they moment he rescued her.  Cherri did not want anything to do with Jax, especially when he kept messing up every time she started to trust him.  Of course, Jax is relentless in his pursuit of Cherri.  This is another story that had a surprise that I never saw coming.

To me, this book has the most chemistry between the couples.   The heat hits me in my face every time these two are in the same room. From the first moment they met, there was fire…I love a book with a curvaceous woman and a red head at that… Chas’ son is taking reading lessons from Addie, a librarian, they both fell in lust with each other. The dirty-talking biker and the librarian…what’s not to love?

Axe and Baylee met at a wedding and had a one-night stand, little did they know that they will meet again–really small world.  Each of them wanted more and couldn’t forget about the other.  Baylee is career oriented and have no time for a relationship. So, when she accepted a job and realizes that that client is The Insurgents and Axe–what to do what to do…

This book is another suspense–Baylee is remembering her mother’s murder and the killer is still out there. No worries, she has her very own biker to keep her safe.

Banger is the President of Insurgents MC, and he was not looking for a woman to replace his dead wife.   Until he met single-widow, and mother of two, Belle.  I love Banger and Belle together; She keeps him in line–calmer…brought him to his knees (literally).  He is a no-nonsense leader, and at 46, he is set in his ways…handsome, rugged, and tatted.

Belle was devasted when she found out that her husband was having an affair, she forgave him, but he died soon after. Her only focus was on her children and providing for the family.

This story is another page turner (well they all are).  The twist in the story though, I never saw it coming…brilliant writing, Ms. Wilder.

I couldn’t wait to get to Jerry’s story; I wanted to see what Banger would do to him when he realizes that he is dating his daughter, Kylie.  From the moment Jerry saw Kylie he was smitten with her, but she was too young…blah blah blah!  Now Kylie is all grown up and Jerry can no longer stay away.  Again, the plot and twist in this series is freaking amazing; this book was no different.

This is my second favorite book/couple in the series.  Throttle, is the Road Captain of the club…sexy, handsome, and cocky…man-whore (wait, they are all man-whores).  The only thing he cares about is riding his Harley and women.  So, when he met sassy-mouth mechanic, Kimber he couldn’t understand why he couldn’t get her out of his mind.  After all, she is not his type…or so he thinks…besides why is a woman doing men’s work.

I won’ say that Throttle is easy to like, but I love his attitude and the fact that he was taken down a peg or two by Kimber.

Another crazy plot…twist and turns galore in this book.  This was my least favorite in the series, and I love it so that is saying a lot about how good this damn series really is. This is also a second chance at love book…so romantic and dramatic.

Rock and Clotille fell in love many years ago. She is the rich, spoiled girl who stole Rock’s heart. However, when Rock went to prison, she deserted him–or so he thought.

So many secrets in this story, twist and turns everywhere. Also, this book’s setting was in the historic New Orleans–one of my favorite places.

An Insurgent’s Wedding (Hawk and Cara)

This is the story of Hawk and Cara’s wedding, and it did not disappoint.  Cara is getting her classy wedding and Hawk is having his biker wedding–with his brothers.

All is not peachy for the newlyweds, when an old enemy materializes the love birds are put to the test. This book provides closure from a pain in the ass enemy.

Love! Love! Love!  I miss the brothers and their women, so this was a refreshing read…pure excitement.  I hang on to this one for a while…just savoring it.

In this book, the insurgents are having a toy drive for children less fortunate (aren’t they generous) but the toys are showing up missing.  Not only that, Banger and Hawk’s children are put in danger…Ms. Wilder did it again!

I truly recommend this series to not only motorcycle club romance fans, but to anyone who loves a good love story.

Great storytelling from Chiah Wilder! Her writing is engrossing, witty, and so interesting.  I am currently reading the spin-off series, Night Rebels.

Have you read this series, what did you think about it?  Please leave a comment below.