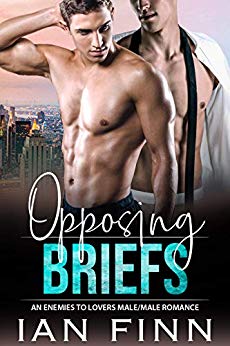 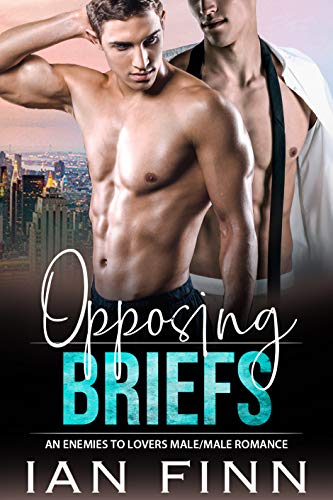 Am I falling for my enemy... a straight man?

He's my opponent in the courtroom.
He defends the same scumbag criminals I'm trying to put away.
Plus he's my rival in the New York City Marathon.
We're training for a competition between our firms.
And, unlike me, he's not even gay.
So, why do I find myself so damn attracted to him?
His cocky swagger and alpha attitude drive me crazy.
But I'm starting to have as much fun running with him as arguing against him.
I want to show him what other oral skills I possess.

Could there be room in our completely opposite worlds... for each other?

My whole life, I've done everything right.
Now I'm a big time criminal defense attorney.
But sometimes everything I'm living seems like a lie.
I can't figure out why I'm so attracted to my opposing counsel, Logan.
I've never felt such feelings for another man before.
He's handsome, athletic and intelligent.
I try to tell myself I just want to beat him in court and on the race path.
But deep down I know I want him to take me to the bedroom.
That would ruin my career, and life as I know it.

If I let the real me come out for him, will love destroy us or strengthen us?

Opposing Briefs is an opposites attract, enemies to lovers, coming out/ out for you steamy male/male romance. Part of the Legally Yours series, it is a full length standalone novel of over 50,000 words with no cliffhanger. It combines humor, heat, heart, and a very happy ever after.

This is going to be a short review…maybe. I happened to find Opposing Briefs while browsing Amazon looking for another good MM/Gay romance book to read.  What I found was a JUST OKAY book.  No offense to any, but I find that I like my gay romance written by a woman.  The books are written much better…unless someone knows of any that would make me eat my words…. maybe I am wrong, but it is just my opinion. Anyway, here is my review of Opposing Briefs written by Ian Finn.

Opposing Briefs is an enemy to lovers’ story, and I realized quite early into reading the book that I read book 2, Oral Arguments a few months ago and I felt the same way…although Opposing Briefs was a little better.  The story is about rival opponents in the courtroom, both men are lawyers.  One man, Logan is openly gay, while Andrew is trapped in a loveless abusive marriage to a woman who is a conniving, manipulative bitch, and a gold digger.  He eventually realized that he is gay, when he started feeling an attraction to Logan, but couldn’t understand his feelings.  The two started a secret relationship, by the way, Andrew’s boss is a homophobic asshole and have no qualms about firing Andrew if he finds out he is gay.

This book had me on an emotional rollercoaster because of Andrew’s relationship with not only his wife, but his parents and his upbringing. Logan is everything Andrew is not, and just who Andrew needs in his life.  However, these two men are in their mid to late thirties, with professional careers, but yet they appear to be juvenile.  Instead of acting like grown men, it was like they were not even seniors in high school.  They did not appear mature at all.  The men didn’t act, think, or sound like the mature professionals that they were.

Let’s talk about the wife cheating bit. It doesn’t matter how bad the relationship was that shouldn’t be in a romance book with a HEA.  If this was in the synopsis, I would’ve even thought to read this.  There is nothing romantic about cheating.  Seriously, my heart bleeds for Andrew and what he went through, but cheating is no excuse.  Another thing, Andrew’s declaration of love was premature…I mean seriously though.   Although the book was emotional, I still had to skipped some parts of the book, because I was bored out of my wits.  The book didn’t hold my interest for long and if I didn’t want to find out what will happen to the wife and to see some of the steamy scenes (which was decent)  I would’ve stopped reading the book.

When I am reading a gay romance book, I want it to be great…Opposing Briefs was just okay for me.