In today’s Steamy Series Sunday, I am featuring one of my favorite series and author.  Sydney Storm MC written by Aussie, Nina Levine.  This is better than the original Storm MC (look for this one on my list though, one of the best MC Romance out there).  What to look forward to in this series, bad boy, dirty talking, sexy alpha males and of course some of the sassy women EVER!

USA Today Bestselling Author, Nina Levine is one of my favorite MC Romance authors.  Hailing from down under-Australia (which is the setting for the series).  She is one of the best authors at writing dirty, sexy alpha males and sassy women who bring them to their knees.

Sydney Storm is similar to other MC series, where you have a group of men in a motorcycle club.  These men took vows to follow club rules, and to be there for each other–to protect each other.  Anyone who messes with the club, will be handled anyway the President seem fit to do.  In the midst of all that each brother meet and fall in love with the women of their dreams. Just how they like their women, sassy and sexy. 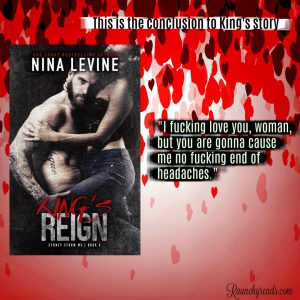 Although I love them all, King stole my heart–from the start (isn’t that a song or something). My favorite brother in the series is the President, King. He is unapologetic and a straight up a sexy badass.  If anybody messes with him or his family, they will learn the hard way-retribution.  He is so great that his story was told over two books (books 5 and 6).  I can’t wait to see him again in the new series Storm Reloaded. 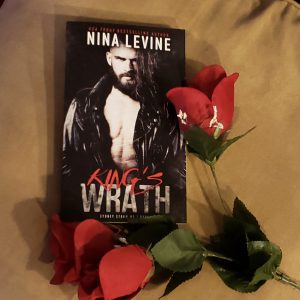 I think you already know which book is the best in the series–for me.  I know everyone who read this series have their favorite book and their favorite brother, but mine is definitely King and fave books are King’s Wrath and King’s Reign. In these books, I get to know everything about the enigma that is the man. I’m sure this is the best books in the series for most–nothing like it.  In the first book, King’s Wrath, it went back to his childhood, met his first love, lost his first love (or what he thought was love at the time). You also met his family and a sassy woman, who will be his downfall– he will fall hard for her and in King’s Reign is the conclusion to their story. I also saw what a bad-ass he really is and the reason why he is the President of the club.

I believe King’s Wrath and King’s Reign is the last in the Sydney Storm Series, but there is a new series starting, called Storm MC Reloaded and the first book is called War of Hearts, which features King’s step-daughter and one of the Sydney Storm MC members.

This book will be out October 15th on Nook and October 17th on Amazon.

Update: The book was pushed back and will be released in August 2019.  This is now the second book in the series–not the first as the author intended

The series can be read as a standalone, no need to read Storm MC.  Sydney contains graphic sex scenes, foul language, and some violence, and is not intended for those under 18.

“Nina uses her words to make her readers ache and burn, only to turn around and soothe with her thoughtful prose. Her ability to make me feel, to experience her characters’ journeys wholly, keeps me coming back for more.” – Prisoners of Print Blog

Sons of Sangue-Patricia A Rasey