The Breeds are humans altered before conception with the DNA of the predators of Earth. But although they all carry the genetic material of beasts within them, Cassandra Sinclair stands apart. A unique mix of wolf, coyote and human, she is revered by many—but preyed upon by others. She is fiercely protected by her community…but no one manages to stop her when she slips away one day to offer her body in exchange for her sister’s safety.

The man she succumbs to surprises her by unleashing her inner animal in ways she never dreamed possible—and provokes her deep, furious rage. To Cassie’s shock, he is the mate she has long awaited. She may never be able to forgive his deception. Still, as dangerous enemies track her, and as the threat of all-out war between Breeds and the humans who despise them hovers in the air, they must join forces and hold fast to each other.

Bow down to the queen!  I have waited so long for Cassie’s story and the anticipation was killing me…but it was well worth the wait.

By far the best book in the series.  Cross Breed couldn’t get any better.  Lora Leigh delivers on this one–believe me. Just when I thought that the series was starting to get a bit repetitive and boring, she shows me that she still got it.

I fell in love with Dog the first time he was introduced and he was an enigma.  He is mysterious, dangerous, deceptive and deadly, which is why I knew that Cassie’s mate couldn’t be anyone else but Dog–a man that is equal to Jonas–so glad I was right.  Dog is pure ALPHA male and the way he is always smirking or finding humor on behalf of his mate is sooo cute got me smiling.  There is not one scene with Dog that I didn’t have a smile on my face.  He waited for the wrong time to claim Cassie, he is overly protective of his mate, but as we learned, Cassie is a bad-ass Alpha female (who knew).  What happens when two Alphas get together? That’s right the battle for control.

Cross Breed kept me riveted on every page (the plot was freaking awesome).  I couldn’t get to the next page fast enough–definitely a page turner for me.  Could be the anticipation of finding out who her mate is–but the book was just enthralling from the very first page–I wanted to savor every word, but I just had to turn the next page to see what happens next.

The chemistry between the two character were electrifying from the beginning. Even before Cassie knew who her mate was, she was burning for him. In true Lora Leigh style the sex scenes were as steamy as can be. This is one thing that Lora Leigh is known for her steamy scenes throughout the book. You will not be disappointed.

This HEA was everything I hoped and more.  I highly recommend this book and this is why it is a #1 best seller on Amazon. Lora Leigh is back on track with Breeds. Cross Breed was a total gem–must read.

My only wish is that we get to see more of Dane, Mutt, and Mongrel–I can’t wait for their HEA!

“Look at me. Do you think you don’t have all of me? For even a second?”

Nothing mattered but ensuring that the danger didn’t touch her, that nothing, not human or breed, harmed her

Without Cassie he was nothing. His very existence was without meaning. 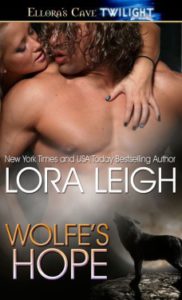